The Chilean newspaper ‘La Cuarta’ reports on Women Can Build and its pioneering work in gender equality in Europe. 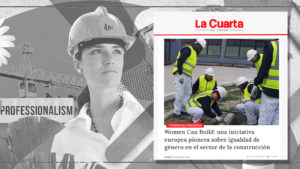 The Chilean newspaper ‘La Cuarta’ reports on Women Can Build and its pioneering work in gender equality in Europe.

After its finalisation in December 2020, the Erasmus+ project continues to achieve success on both sides of the ocean. This time, it has been the Chilean online newspaper ‘La Cuarta’ that has echoed the initiative, publishing an article in which the most outstanding objectives and results have been highlighted. The newspaper praised Women Can Build as “a pioneering European initiative on gender equality in the construction sector”.

Read the full article below:

Women Can Build: a pioneering European initiative on gender equality in the construction sector

Construmart and RedMaestra present Women Can Build, a beautiful project that has redesigned vocational training considering women’s inclusion and incorporation into the labour market.

Except for 2020, when the percentage of women in the construction sector fell from 8.9% to 8.2% due to the pandemic, these figures have remained practically unchanged over the last five years. For this reason, Fundación Laboral de la Construcción, a Spanish non-profit organisation, launched in 2017 the Women Can Build Project, a pioneering proposal to promote the incorporation of women in the construction sector through training.

This initiative is co-financed by the European Erasmus+ programme. For three years, it involved 8 reference entities in the field of vocational training in construction, from Spain, Germany, Belgium, France, Italy, Germany, Italy and Portugal.

The main objective was to identify the barriers that keep female talent away and try to break them down by redefining training. To this end, the strategy designed addressed 3 key areas: Women, Teachers and Companies.

In the Women’s area, introductory courses were organised for 50 unemployed women with no previous experience in construction to introduce them to the sector and encourage them to develop a professional career.

More than a hundred testimonies of female construction workers, students and trainers have been collected on the Women Can Build website to tell their experience as an example for other women.

All efforts add up

The success of Women Can Build has raised awareness and reached out to the public through its impact in the media.

Fundación Laboral de la Construcción and its commitment to equality

Fundación Laboral not only demonstrates its commitment to equal opportunities and the incorporation of women in the construction sector with Women Can Build but also with its annual event on the occasion of International Women’s Day.

Since 2020, it has been promoting the #ConstruyoIgualdad movement, which supports female talent, giving visibility to those “unstoppable women” who have fought to make a place for themselves in the construction industry.

“From Mujeres Maestras we want to continue encouraging women and showing their realities in other parts of the world. Nowadays, with such a small communication gap, it is possible to address good practices, raise collective awareness in the business world, help to break down myths and show that in this area we can make faster progress. This is within reach and Women Can Build shows us that anything is possible through collaboration”.

Previous Post
The number of women in construction falls in the year of the Covid pandemic, in Spain