“As soon as they saw me, the students asked if I was going to teach them how to lay bricks” 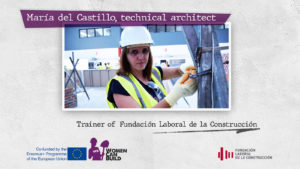 “As soon as they saw me, the students asked if I was going to teach them how to lay bricks”

María del Castillo, after holding several relevant positions in the construction sector, is currently working as a trainer for Fundación Laboral, in a Certificate of Professionalism in Building and Civil Works

At 46 years of age, and describing herself as a lover of the restoration and rehabilitation of old buildings, the technical architect María del Castillo Almena is currently working as a trainer for Fundación Laboral de la Construcción, giving a 600-hour Certificate of Professionalism in Building and Civil Works at the Training Centre that the entity has in Vicálvaro (Madrid).

María del Castillo worked for 14 years on her passion for restoring historical heritage, for which she completed her training as a quantity surveyor with various specialized courses in construction materials and techniques -some of them given by Fundación Laboral-. Thanks to this, she worked as a construction manager in several major refurbishment projects, such as the Santa Cruz Museum in Toledo, the partial restoration of the walls of Ciudad Rodrigo (Salamanca), the façade of the Archbishop’s Palace in Valladolid, or the partial demolition of the Ducal Palace of Lerma (Burgos, now the state parador of tourism), among others.

After working for three years as a technical architect in the City Council of Ciudad Rodrigo, a stage that she describes as “one of the happiest” in her professional career, she jumped into the department of “Contracting of works and cost control” of an Airbus subcontract, a post “much more office and more economical profile”, in which she missed being at the top role in the construction works.

The crisis in the construction sector and a serious car accident that left important physical sequels, made her turn her professional career, helped by the Coaching Program “Reinventing Me”, taught by the Official Association of Quantity Surveyors and Technical Architects of Madrid (COAATM), and for which she feels very grateful, because it helped her “get out of a professional and very hard personal moment”. Now she has been teaching for two years, where, in her words, “I can teach others everything I learned on the job”.

As a trainer, Maria gets involved with her students, and that can be seen in how she treats them, how she talks about them, and in the appreciation they also show for her. It is a group of young people under the age of 30 -15 boys and 5 girls-, who struggle to make their way in a sector “still demonized by the great crisis suffered”, but with “professional opportunities assured as soon as they finish these studies”. Mary still remembers the day when she was presented to the group: “They thought I was the teacher of the theoretical part of the classroom, and when they saw that I wasn’t, they asked: – But you are also going to teach us how to lay bricks?”

Question.- After 22 years of experience in construction, what evolution have you noticed about the presence of women in the sector?

Answer.- When I started, almost everything was male; now you see more women, especially in training, but it is clear that it is still a mostly male sector.

Q.- Have you lived in your flesh some kind of “sexism “in the works?

A.- Uf, yes. Once a promoter threw me out of the project when I arrived and they told him that I was going to direct it. The company that was going to execute it rescinded my contract and I remained unemployed.

Q.- Have you ever worked with other women on a construction site?

A.- Yes, curiously, at the beginning of the year 2000, in the restoration of the Convent of Santa Fe, in Toledo, I was the head of the work and they left me free to hire, and I hired all the women: crane operator, restorers… It was so remarkable that we were only women, that some media came to record us.

Q.- But today, the media continue to report on the presence of women in the sector, which shows that things haven’t changed so much, have they?

A.- Things haven’t changed that much and it’s a shame. Just as there are some jobs where more physical strength is required and it is logical for men to perform them, because of their own complexion, women are generally finer and more detailed and I believe that there are some jobs in the sector that we do better and in which we could be more prominent.

Q.- And what would you do to invite them to join the sector?

A.- First of all, I would tell them not to be afraid, and then, to begin to train and specialize, that they can start from very basic levels and continue to improve. It is very gratifying to see the result of something you have contributed to do with your own hands. I’ve had some students who have started from zero, and some with very complex family situations, and today they work in construction specializing in scaffolding or working at heights, with salaries and stable jobs that they love, and they feel super proud of it.

Q.- Do you think it is also necessary to “clean the image” of the sector?

A.- Yes, of course. There are many people who no longer trust this sector to develop a professional career and even less young people, who are looking for stability in order to be able to become independent and create a family. We have to transmit that construction is a sector with safe professional opportunities and that, after the crisis, the situation has normalized.

Q.- In your professional career, what has it cost you the most for being a woman?

A.- Above all, I have to constantly prove my worth in order to be respected. Especially in the direction of works, most of the men in the teams I had, started from the premise that being a woman did not know well what each thing meant, and only when you are showing them everything you know and that you are prepared as any man, is when you gain their respect. In almost every job I had ‘on the site’, it was like that.

Q.- I have seen in your curriculum that several of your courses you did with Fundación Laboral. Would you recommend them?

A.- Yes, of course. Most of them I did in e-learning modality, with very intuitive and well elaborated didactic materials, and that allows you a lot of freedom and flexibility to be able to train, when you also have work and family at the same time.

A.- Well, it wasn’t; it was something curious. Life goes round and round and I love to be part of this entity now. There is no other organization so big that gives construction courses comparable to Fundación Laboral de la Construcción, with all its centres and the resources it has, but I believe that there are still many people in the sector who do not yet know it well, what Fundación is, why it was created, what its goals are, and who can find free courses, etc. Fundación Laboral also needs to be better known.

Previous Post
“They tell you that women come to the sector to steal work from men, and that’s not true. There’s work for everyone”
Next Post
“I hope I will get into the construction sector to work, because it’s a very interesting and dynamic field”

“There are no women and there are no men, there are people who work in the field who are competent”
18 December, 2019
The Chilean Chamber of Construction is interested in the projects of Fundación Laboral de la Construcción
2 September, 2019
“I hope there will be more women in the construction sector in the future, to make a stand and prove that we are here and we’re worth it”
20 March, 2019