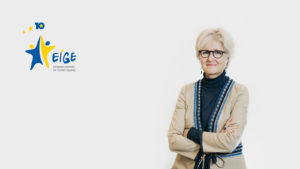 The European Institute for Gender Equality (EIGE) is the only agency in the European Union dedicated exclusively to gender equality. In addition to being considered as the European centre of knowledge on gender equality, as a result of the significant resources it has already collected and developed.

Carlien Scheele has today started her five-year term as the new Director of European Institute for Gender Equality (EIGE). She, with a Dutch nationality, takes over from Virginija Langbakk, who has led the Institute since its inception in 2010.

“I am excited to take over the leadership of EIGE and build on the impressive work done by the Institute’s first Director. I want to cement EIGE’s position as the EU’s knowledge centre on gender equality by deepening collaboration with other organisations, crystallising our messages and stressing our added value,” said Ms Scheele.

“Gender is not a side issue – it is always relevant. From the economy to climate change, EIGE needs to show who is affected, how, and what policymakers can do about it,” she added.

Ms Scheele has nearly 30 years’ experience working on equality-related issues. She joins EIGE from the Dutch government, where she most recently served as Director of Gender and LGBT Equality. In this role she was responsible for mainstreaming a gender perspective into all ministries’ policies – a task she was subsequently asked to undertake at the Council of Europe on secondment from the Dutch government.

These roles fired her passion for gender mainstreaming and clear messages: “You have to tell stories and you have to explain the impact of inequality on people’s lives in concrete terms, you have to provide practical tools for policymakers,” she said.

Ms Scheele chaired the Council of Europe’s first Gender Equality Commission, as well as its Committee on Social Cohesion, Human Dignity and Equality. She has also been a member of EIGE’s Management Board and the EU’s High-level Group on Gender Mainstreaming.

Previous Post
BZB has organised a construction workshop for German high school students
Next Post
“I think that many young women don’t think of doing a traineeship in the construction industry. I probably wouldn’t have thought of it either if I hadn’t seen the opportunity in the family business”

“Come woman, courage! If you keep thinking that these are men’s jobs, there will never be a sector with women“
11 February, 2020
“I still have many insertion difficulties today, as far as it is necessary to be very determined, because there are many prejudices”
7 August, 2020
Strategic alliance to promote gender equality in the Spanish construction sector
19 November, 2020