“I encouraged myself to train because this is a beautiful sector: from scratch you can build whatever you want” 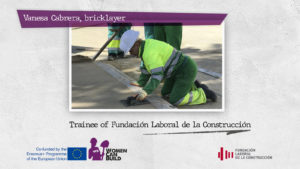 “I encouraged myself to train because this is a beautiful sector: from scratch you can build whatever you want”

After a whole life wanting to be part of the construction sector, Vanessa Cabrera took the step last year. After trying in a company of the sector, she returns to look for a work to be able to work in what she likes.

Although Vanessa began her training in construction with 40 years old, her passion for this sector was born earlier. Since she was a child she had seen her father working as a bricklayer, although she never tried. Last year, Vanesa was registered in a course from Fundación Laboral and the Humanes City Council of Madrid and started her career in construction. After her first work experience with good and bad things, now she is looking for a position in a sector, which always surprises her and in which she has learned a lot.

QUESTION: What did you do when you registered for the course? Did you have any connection with construction?

ANSWER: I have been in several sectors: I have been a salesperson, a waitress, a shop assistant, but when I registered for the course I was unemployed. I had never worked in construction before. It is true that I knew some things about this sector because my dad was a bricklayer, but I have never worked in it. Many times I had wanted to work with him but as I was a woman, and he never let me. I’ve seen him work at plastering, brick-laying, tiling…

Q.- What did your father tell you about working with him?

A.- He told me how I was going to work on a construction site. I think it was for fear of his only daughter getting involved with other men. In any case, construction has been a sector that I have seen closely.

Q.- Do you think it matters to be a man or a woman to do this work?

A.- No, not at all. In fact, in some jobs women are better valued because they say we are more delicate and cleaner.

Q.- Why did you decide to take the course?

A.- Because I like construction. As I was saying, after having seen my father, it was something I liked. Also because I see it so beautiful: from scratch you can build whatever you want.

Q.- Did you like what you learned on the course?

A.- Very much, I loved it. Besides, the teacher, Domingo, was charming and I learned a lot. I would do the course again. Besides, after the course I started to work in the sector and I have continued to like it. It is a job that I discovered late, but I really like it.

Q.- During the course you saw different modules… Which is your favourite one?

A.- In general, I liked everything, I couldn’t choose one, although I had never seen printed concrete before and it caught my attention. It looks great.

Q.- Has the course been what you expected?

A.- In fact I didn’t have high expectations, but for me it was a bit short. The field of masonry is very large, there is much to learn. I would like to add even more to what I have seen. We finished in May, I think it was three months and it was very short. There is so much to learn…

Q.- You also did an internship, how was the experience?

A.- Yes, with the Humanes Town Hall, and it was very good, we did a lot of tiling. I was lucky because I was with a good officer and a professional who worked with printed concrete. I learnt a lot with them: how to make stairs, how to lay out… They were very patient and ready to teach, because some of my colleagues only did painting and tiling work… I did a little bit of everything, I even did plumbing repairs.

Q.- Were there more girls in the course?

A.- There were ten girls and three men.

Q.- It is not normal to find many women in this sector, why do you think there are so few?

A.- I think it is because there is a lot of male dominance in this sector and many women do not want to go in. Also because it is said that you have to use a lot of force: one colleague said that if she knew what it was, she wouldn’t sign up, she thought it was a man’s job. I don’t think it’s a man’s job. It is seen as very masculine, but it is not. I have had the experience of working in the sector after the course, and I didn’t meet anyone who said anything macho or anything.

Q.- What was the general opinion of your colleagues?

A.- The majority of us liked the course. My sister-in-law who also did the training is looking for work in the sector too. Almost all of us are very satisfied, we learned a lot.

Q.- After the internship you worked…

A.- I started working in a renovation company. The problem is that they didn’t pay and I had to leave. But I’ve been there for a long time, and with my work I’ve been very happy, I did a little bit of everything.The bad thing was that I entered with some conditions, but then they didn’t legalise my situation, they stopped paying me and nothing is known about the owner, he has two abandoned works… I’ve had bad luck, but you learn from these things.

Q.- Do you think this type of practice happens often in construction?

Q.- What measures will you take to avoid the same thing when you find a job?

A.- First of all, look for serious companies that have an office where you can complain, and which have everything in order. I knew this company from a third party, but it has all gone wrong. But not everyone works that way.

Q.- Do you think age is important when doing jobs?

A.- I don’t think so. The official with whom I worked was 54 years old and moved around, I don’t think age is important. Besides, masonry makes you fit.

Q.- Before training, did you consider doing a course?

A.- No, I didn’t know that you had to train for this, that there were courses. I thought that in this sector you had to enter as a pawn in a work and go up. If I had known that, I would have started training earlier. Also, I didn’t go to any company; I thought: where will I go? I had a neighbour who was a crane operator and she told me to go with her to the construction site… But she died using the crane and in the end I couldn’t go with her.

Q.- Would you like to continue training in the sector?

A.- Right now it’s complicated because of the work schedule, but when I have another one in the morning or afternoon, I would like to continue training and improve in the sector.Above all, I would like to broaden my knowledge of printed concrete, because although it is hard, it is something that has interested me since I saw it on the course.

Q.- Now are you looking for work in the sector?

A.- I am working in a restaurant but I would love to get into construction, if I find something in the sector I would leave the restaurant. I keep looking because it is something I like. If tomorrow I get a call from a company that is in good situation, I will go to work.

Q.- What would you say to a girl who wants to and does not have the courage to start?

A.- She should leave her fears behind, construction is something very beautiful. If she really likes it… I encourage all women to train and to try this sector. Let them taste it; they will see that this work is very satisfactory.

Previous Post
“I thought that being a girl I would go wrong, I would not know how to do it, but I am going fine and I am very happy”
Next Post
“I thought it was going to be a sector with few opportunities, but there are already companies that are calling us to do internships and work”

“When I work I’m ‘the crane operator’. They don’t have to see me as a woman or a man, they just have to respect me”
6 Mar 2019
Women Can Build presents the results of the project to the German public
20 Sep 2020
“I would tell a girl that if she wants to work in construction, to train and work, to never doubt it just because she is a woman”
20 Mar 2020