Women Can Build, an example of International Good Practices, in Germany 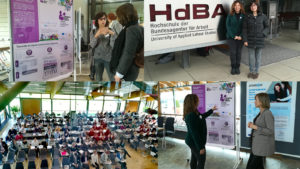 Women Can Build, an example of International Good Practices, in Germany

On April 5, the Women Can Build project was presented at the Conference for Women’s Empowerment and Gender Equality, organized by the University of Applied Labour Studies, part of the Federal Employment Agency (HdBA), in the German city of Schwerin. The attendees to the symposium knew first hand the actions that the partners of this initiative are developing, which was shown within the area of “Example of international good practices in the construction sector”, along with those of other countries such as United Kingdom, Lithuania and the host country itself -Germany-.

During the congress, issues such as: laboral and remuneration conditions, training or qualification and promotion, which are faced by women today, were addressed. An approximation was also made to the situation of migration and refugees.

Previous Post
“From the jobs I’ve done, crane operator is the one I like the most. I will try to work on something I enjoy as long as I can”
Next Post
“The training has helped me find a job I really like”