“The training has helped me find a job I really like” 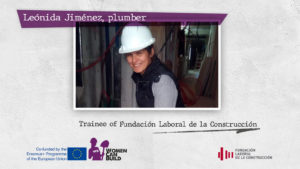 “The training has helped me find a job I really like”

Leónida Antonia Jiménez Ayala, without previous experience in the sector and after more than ten years dedicated to carry for the elders, has decided to start the professional certification course level 1 in Plumbing at the Training Centre of the Fundación Laboral of Palma

After more than ten years of caring for the elderly, the 39-year-old Paraguayan has started studying for a Level 1 Professional Certificate in Plumbing at the Palma Training Centre in Mallorca. Without previous experience in the sector, and in spite of the difficulties she has had to face during her training, Leónida has obtained a contract in a job in which she does incessantly learn

QUESTION.- Why did you enroll in the Plumbing course? Did you have previous experience in the sector?

ANSWER.- Not at all. I’m from Paraguay, I’ve been here since 2004 and I’ve always worked taking care of children and elderly people, and cleaning. I had no previous experience with construction, although I had always wanted to study plumbing or electricity. I didn’t have any studies, but in order to be able to work they always ask you for training I started to study.

Q.- What do you remember of your time in the course? Which module did you find most interesting?

A.- I really liked the course, especially the Plumbing module. If I had to do it again, I would repeat it. I felt very good. I thought they were going to make a difference between boys and girls. In fact, I was the only girl in the class, but everything went very well; my classmates treated me like one more.

Q.- Did you do an internship with the course? How did you see yourself doing your job?

A.- At first I didn’t see myself capable of doing the job, because it was something I had never touched until I started studying. But if I had come so far that I had come from Paraguay to Spain, I could do it. And so it happened. Then the days flew by during the internships, and how long it has taken, it seems to me really slowly.

Q.- Did you ever doubt in launching yourself into this sector because you are a woman?

A.- No, not at all. When I went to sign up, a boy asked me what I was doing there, in a plumbing course. He asked me if I was waiting for my husband, and I replied that the course was for me. When he was in front of me in the course, I reminded him of what he had said to me, and he told me that you didn’t expect to see a woman there. But at no time did I hesitate to leave him for this. On the contrary, if I can do more courses, or a training at the Foundation that goes well for me to have outlets and join the sector, I will be delighted. Now I was looking at the Eveloping Wheelbarrow course. I don’t rule out continuing my training.

Q.- You had a series of personal problems to face the course, how did you face them?

A.- I had many different personal problems during the course. It was a bit hard, but anyone can have a hard bump. Mónica, who is a counsellor at the Palma Centre, recommended that I go to the Red Cross in order to receive some kind of help, and later I had the help of a social worker.

Q.- Have you not thought about leaving the course because of this?

A.- Many times, but they had given me an opportunity that I couldn’t miss. I saw a way out in the Foundation. In fact, I’ve never missed a class or anything. Training has helped me to find a job that I like very much. I don’t regret taking the course at all.

Q.- What do you like most about your work as a plumber?

A.- I do plumbing every day. I couldn’t tell you what I like the most but, above all, I love to learn. I try to do what my classmates do and keep all the knowledge. I’m learning little by little.

Q.- Is there any other woman in the company you’re in?

A.- I haven’t coincided with more women either in the course or at work. Without going any further, today in a construction site I was asked what I was doing there. They asked me for documentation and also if I was doing an internship. They didn’t think I was a plumber.

Q.- Why do you think women are no longer encouraged to be part of the sector?

A.- I have spoken to some women and they have told me that I am crazy to study plumbing. They tell me it’s a boy thing. I think it doesn’t matter, because in reality we are on an equal footing.

Q.- Do you regret not having gone before to work in construction?

A.- No, because I thought it was impossible. I have a 21-year-old son, and my life has been dedicated to being caring for him, to earning money to support him. Before forming myself, I thought about working so that my son wouldn’t lack anything. Now that my son is well educated and has his job, I have been able to start my education.

Q.- How do you think the sector will progress in the coming years?

A.- There are some women who slow themselves down. They say they can’t. I used to do cleaning for hours, but this compensates me more. I wouldn’t go back now, I plan to continue working on this as long as I can.

Q.- What would you say to a young girl who is considering entering the construction sector?

A.- When I talk to a woman I say: – “Why don’t you try? You’re going to like it. I didn’t think I was going to like this job so much. I have a good time working.

Q.- You told me the other day that your time at the Fundación had changed your life…

A.- The Fundación Laboral has changed my life because of the training it has given me and the possibility of studying the course. In addition, Mónica, from the Palma Centre, told me where to go when I told her about my personal situation. But my life changed, yes. It was the best thing that ever happened to me, after the two children I have.

A.- I haven’t worked with so many young people. Above all, I see people from 45 upwards. In the construction site I went today there were more than twenty people working and none of them were less than 40 years old. In the course I coincided with four young people: a boy of 19 and three others who were around 30, but no one else.

Previous Post
Women Can Build, an example of International Good Practices, in Germany
Next Post
“People say that working on the construction site is too hard for women, they say we can’t do it, and of course I could”

‘Trabajadora’ magazine of trade union CCOO publishes an article about the European project Women can Build
1 March, 2018
“I encouraged myself to train because this is a beautiful sector: from scratch you can build whatever you want”
17 February, 2020
New European report on glass ceilings: Women in management
3 October, 2018