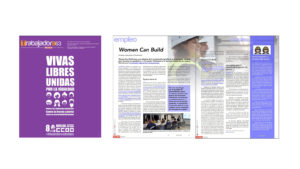 In its February 2018 issue, dedicated to International Women’s Day

In February 2018, the ‘Trabajadora’ magazine published by the Secretariat for Women and Equality of the Spanish Trade Union CCOO, published an article on the European project Women can Build -pages 8 and 9 of the publication-, in an issue entirely dedicated to women workers, on the occasion of International Women’s Day.

The text gives a detailed account of the objectives of the initiative, the stages that will be developed throughout the 36 months of the project’s lifetime -from September 2017 to August 2020, the results that are pursued and the sense of this type of multinational cooperation.

Because, as pointed out by Vêra Jourová, European Commissioner for Justice, Consumers and Gender Equality, in the Strategic Commitment for equality between women and men (2016-2019): “Although Europe has made continuous progress in recent years thanks to the intense work deployed at local, national and European level, equality between women and men is still a pending issue and we are far from achieving it, especially in areas such as participation in the labour market, economic independence, salaries and pensions, presence in decision-making positions, the fight against sexist violence and our external action”.

Through Women can Build, it is intended to advocate for equal opportunities from an inclusive approach of the Vocational Education and Training system, promoting professionalization, through equal training, and promoting women’s labour insertion, with the activation of the labour market.

If you want to read the English translation of the article, is now available.

Previous Post
Teaching career in Europe and their requirements
Next Post
Women can Build in ‘Objective: employment’ of M21 radio station

“I encouraged myself to train because this is a beautiful sector: from scratch you can build whatever you want”
17 February, 2020
“To the women who want to be part of the construction, I would say to them to have courage, that this is a job opportunity”
17 September, 2020
“I thought that being a girl I would go wrong, I would not know how to do it, but I am going fine and I am very happy”
12 February, 2020