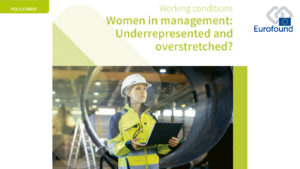 The gender inequality remains a defining characteristic of European labour markets. Despite rising participation in the labour force, women’s careers remain concentrated in specific jobs and economic sectors. Moreover, their career mobility and advancement through the ranks into management remain limited (identify as a glass ceiling).

In connection with the specific working conditions of management positions, we must point out that managers are strategically placed, having the latitude to shape practices and policies in the workplace. This position gives them a twofold role: contributing to the success of the organisation while also guarding the well-being of their subordinates. For this, the underrepresentation of women in strategic positions undoubtedly has repercussions on work and the labour market.

Despite years of gender equality policy, the limited presence of women in management roles in Europe illustrates the magnitude of the challenge and highlights the need for more concerted effort and comprehensive long-term strategies to drive change. In this sense, the Eurofound has realized a policy brief «Women in management: Underrepresented and overstretched?», focuses on women who have overcome the barriers and advanced into management. It aims to assess whether women, once they have reached a managerial role, continue to encounter obstacles that their male counterparts do not face.

Empirical evidence bears out the presence of the glass ceiling. In this sense, the scarcity of female managers is the combined result of wide-ranging social and cultural factors, these include, for instance: cultural norms, insufficient formal care infrastructure, the unequal distribution of care responsibilities and unpaid work at home, the belief in a limited pool of female workers available for management positions, and the lack of female role models in senior positions.

According to this facts, data from the European Institute for Gender Equality concerning 2017, shows that women accounted for just 25% of board members in the largest publicly listed companies registered in the European Union (EU), although the situation varies significantly between EU Member States. Also, according to the Special Eurobarometer poll on gender equality conducted (in 2017), 35% of respondents said that men are more ambitious than women. In some EU countries, this figure rose above 50%.

For avoid this situation, the Union has been at the forefront of advancing gender equality, at times, encouraging reluctant Member States along to follow this path. The first step was taken in 1957, when the EU established the principle of equal pay through Treaty of Rome. Since then, several policies have paved the way towards the goal of equality.

The European policy brief reports data that show the current labour market situation. A reality in which gender inequality is present in most Member States.

Gender inequality in the management tier

The report specifically addresses the management situation at the different levels, sectors and structures of the EU itself.

On average, women make up 36% of all managers in Europe. Some of the newer Member States lead the way in terms of the equal representation of men and women both in labour markets and in management (in any of the three types: supervisors, non-supervising managers and supervising managers).

With regard to the distribution of male and female workers across sectors, vastly more men than women work in construction, transport, industry and agriculture, while women predominate in education and health. In this sense, construction is mainly represented by men, who hold 91% of the sector in contrast to 9% of women. Further, management is mainly occupied by men (92%), compared to 8% of women.

“When I work I’m ‘the crane operator’. They don’t have to see me as a woman or a man, they just have to respect me”
6 March, 2019
The Women Can Build consortium seeks to increase women’s interest in the sector, in Liège
20 November, 2019
“We are reluctant to think that we can do the job like the boys, but we can give this sector a twist”
16 October, 2019