Women can Build, at the national programme radio ‘Ellas Pueden’ of RNE 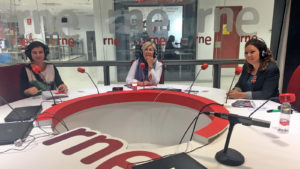 Women can Build, at the national programme radio ‘Ellas Pueden’ of RNE

“Construction is not a matter of men, it is a matter of qualified professionals and, above all: Women can Build!”. This is one of the conclusions that Beatriz Oliete, head of the European project, points out during her intervention in the national radio round table of the RTVE programme, Ellas Pueden.

The programme, which was broadcast on 10 November, was attended by representatives and experts from the construction sector: Beatriz Oliete, sociologist and technician from the International Projects department of the Fundación Laboral de la Construcción and responsible for the Women Can Build project; Goretti Urrutia, psychologist, gender expert and coordinator of the Spanish Red Cross Employment Programmes; and María José Pérez, student of the Fundación Laboral and first Spanish woman crane operator.

A tall cast, moderated by Marta Pastor, where barriers that women face in joining the masculinized construction sector focused the debate. In this respect, the Fundación Laboral de la Construcción and the Spanish Red Cross, have created synergies to improve the access of women into the construction site, thanks to the cooperation of both entities in the implementation of a series of proposals or strategic measures that favour the promotion of equality within the industry.

This is a laudable goal supported by the Women Can Build project, which aims to promote a change of mentality within the construction industry, focusing on three fundamental pillars: education, awareness and dissemination. As Oliete explains: “The European project, which we are developing from the Foundation along with five other European countries, is a three-year initiative that aims to disseminate, raise awareness and educate to achieve a more equal sector, with more women, reaching the conclusion that being a qualified professional, sex does not matter. According to the person responsible for this initiative, it is a question of ensuring that women can be told openly: “Come and work in the sector, you will be welcome!”

Likewise, the European initiative is proposed as an incentive platform for the employment of women in construction through various measures, among which is the dissemination of “the experiences of pioneering women, inspiring women who have fought and have broken barriers, serving as references to other women, as well as younger women to choose these training pathways as a possible career, which is a way to break some of the gender stereotypes,” defends Oliete.

Listen to the Spanish interview at the following link: “As a child I dreamed of tree houses and I knew that one day I would build them for real. Besides, I’ve always liked playing Lego. Building is my thing!”
22 November, 2020
Women Women Can Build closes SomexNet project, for the mobility of European workers and students
4 October, 2019
More than a decade, working for the incorporation of women in construction from the Fundación Laboral de Las Palmas
12 December, 2018