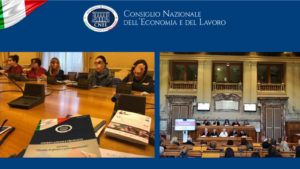 Formedil took part in the Gender Equality Forum organized at the CNEL, to represent the issue of women in the construction sector, presenting the project Woman can build, promoted at European level by the Spanish joint training center of Fundación Laboral de la Construcción in Madrid of which Formedil is a partner.

The project, which involves not only Spain and Italy, but also Germany, Portugal and Belgium, puts in place several actions and tools aimed at intervening on the main actors on the theme of equality: women – men in the sector, starting from training to get to the business. The project also aims to enhance the role of women in a sector that has traditionally been considered “domain” of the man.  It is therefore a matter of defending equal opportunities by promoting professionalize and the employment of women through awareness-raising and training processes.

The aim of the Gender Equality Forum is to contribute to the development of concrete actions to combat the many forms of inequality such as the salary and social gap, the reconciliation of life/work time, the strengthening of services in support of the family; it is also intended to be an open forum for discussion, good practices and new legislative proposals in support of women.

The first session dealt with issues relating to the gender difference in the world of work and, in particular, access to and participation in the labor market.

The second meeting was attended by women (lawyers, trade unionists and/or employees of public bodies such as the Post Office; ABI; “Alliance for Childhood Services”) who discussed and proposed actions to be taken to help reduce this gap. Among the various issues addressed, that of reconciling work and family life. There are no adequate support structures. there is a need to change the cultural approach from school, to textbooks that often depict women engaged in domestic work while men are engaged in a work context, and finally to the training of teachers.

Previous Post
We Build, in Madrid
Next Post
“The first step to improve your job search is to know yourself”

“I must say that there is no problem, except that of prejudice, which will break down with more women in the sector”
11 Feb 2020
“People say that working on the construction site is too hard for women, they say we can’t do it, and of course I could”
9 May 2019
Testimonials from three French women who have chosen to become apprentice team leaders in the Fitting and Finishing area
21 Feb 2019