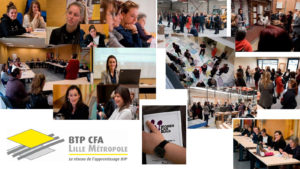 During an open day «Girls’ special» organized by BTP CFA Lille Métropole (Roubaix) as part of the European project Women can Build of which the CCCA-BTP is a partner, several apprentices and ex-apprentices have testified to their training paths, projects and successes.

They are women and have decided to get involved in the construction industry and public works trades. Several young apprentices and ex-apprentices shared their experience during an open day dedicated to girls on March 27th at BTP CFA Lille Métropole (Roubaix). A seduction operation organized within the framework of the European project “Women can Build” of which the CCCA-BTP is a partner, which aims to promote women’s access to the construction trades and to the vocational training leading to them, in a sector still predominantly male.

From various backgrounds, they all at one point resolutely chose the construction industry. For some, this evidence was an obvious choice since starting their studies. « I arrived at the CFA in 2015 after studying at the university which I didn’t like. I wanted to work in a manual trade. I was already making arrangements at home and I realized that this was what I wanted to do every day,” explains Clémence LIEVEN, a carpentry apprentice at BTP CFA Lille Métropole. After completing her training, she joined a company specializing in the manufacture and installation of windows and doors.

Séverine LORGE, for her part, has embarked on a professional reconversion in the construction trades, after several years of professional experience in a completely different sector. “As I no longer liked my job, I left my company and set up a project in the construction sector in one week, making a selection of trades”. Séverine Lorgne joined BTP CFA Lille Métropole as a plasterer-plaque maker, before continuing her training in painting. For her part, after studying applied arts, Charlotte DELEVOYE obtained her professional patent Painter applicator of coatings in BTP CFA Lille Métropole construction nearly ten years ago, before working in several companies on temporary contracts. The one who wanted to create her company from the start went into action two years ago, by founding Ô’Couleurs de Charlotte, a company specializing in painting and decoration, based in Wismes in the Pas-de-Calais region. Consultancy decoration, personalization and implementation too. The young woman continues her entrepreneurial adventure with enthusiasm. “My job is my passion and I really want to do what I love,” she says. Another reason for integrating training in the construction and public works trades, the business takeover. This is the choice that Euphrasia DESRUEZ made by taking over the family business after having started sports studies. After a Painter coating applicator certificate of professional competences and a complementary mention Paint decoration within the BTP CFA Lille Métropole, she continued her training path through an Advanced Technician’s Certificate of fixtures and finishing: “My goal is to take over the business,” says the young woman. All these examples illustrate that the trades of building and public works are not reserved for men. Technological innovation reduces hardship and many companies in the sector are looking to recruit. But clichés can be tough. “We are trying to eliminate gender stereotypes and show that construction is also made for women” says Carine Bachelet, director of BTP CFA Lille Métropole, which currently has 451 apprentices, including about 20 female apprentices. A “small increase” in the last few years, she says. This should reassure Myriam, head of a painting company now retired. “The general female public is still not sufficiently aware of the building and public works trades,” says Agnès Hillion of the CCCA-BTP. Another issue is “to make the male audience understand that women are an asset, that they represent another way of thinking and interacting, that it is important to consider them respectfully,” she says. In fact, many young women have testified to the difficulties they have sometimes had to face.

In any case, the gender diversity is making its way, judging by the interest of the women who came to attend the event: from girls who think about the profession of masonry or carpentry, to business creation projects.
Through testimonials and visits to the CFA workshops, the girls were able to discover the richness and diversity of the construction trades, without prejudice.

Previous Post
“I hope there will be more women in the construction sector in the future, to make a stand and prove that we are here and we’re worth it”
Next Post
“From the jobs I’ve done, crane operator is the one I like the most. I will try to work on something I enjoy as long as I can”

Women can Build consortium advances work at its third meeting in Düsseldorf
21 December, 2018
A group of 10 women take the pilot course ‘Women in the construction industry, Let’s talk about it!’
1 February, 2020
“They tell you that women come to the sector to steal work from men, and that’s not true. There’s work for everyone”
5 June, 2019