We build, in Las Palmas 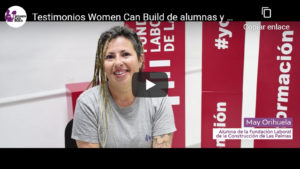 We build, in Las Palmas

Fundación Laboral presents the video testimonial of teachers and students who were trained in the specialty of “Masonry and finishing” in construction in the centre of Las Palmas.

Women Can Build joins International Women’s Day with a strong message: “We build”. Through this video, which collects the testimonies of female students who were trained at Fundación Laboral de la Construcción in Las Palmas, one of their female teachers and the manager of the Canary Islands joint entity, this European project gives voice to women of the sector.

Eight of the 46 students who participated in six Training and Employment projects of Fundación Laboral in Las Palmas were interviewed, as well as Delia Medina, manager of the Regional Council, and Rosario Lorenzo, conservator and teacher of the Foundation. The training was carried out with the support of the entity with other public, local and regional institutions, such as: the Canary Islands Employment Service, the Cabildo Insular de Gran Canaria or the Canary Islands Housing Institute.

Raising awareness of women’s skills to be part of the construction labour market and to improve their competitiveness in relation to their male colleagues, is one of the pillars on which the European project is based and a driving force to promote equality in employment.

Previous Post
“I thought it was going to be a sector with few opportunities, but there are already companies that are calling us to do internships and work”
Next Post
The ‘We Build Too’ course begins, with the celebration of Women’s Day and the institutional visit of Madrid City Council

The Chilean Chamber of Construction is interested in the projects of Fundación Laboral de la Construcción
2 Sep 2019
“Why can’t I give myself the opportunity to be trained in what I want, that opportunity that I didn’t even have in another moment of my life?”
4 Sep 2019
Women Can Build is presented in Portugal as an innovative project for the activity of trainers
10 Feb 2020