“To the women who want to be part of the construction, I would say to them to have courage, that this is a job opportunity” 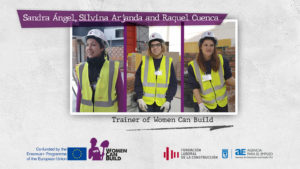 “To the women who want to be part of the construction, I would say to them to have courage, that this is a job opportunity”

We meet the experiences of Sandra Ángel, Silvina Arjanda and Raquel Cuenca, three of the ten women who have participated in the course “We build too: Practical initiation to construction”, held as part of the European project Women Can Build and which ended last July.

After more than four months of break, last July, seven students finished the course “We Build Too: A Practical Introduction to Construction”. A training action organised by Fundación Laboral de la Construcción, together with the Employment Agency of Madrid City Council, as part of the European project Women Can Build, part that belongs to the European Commission’s Erasmus+ programme.

Through this action, initially planned for the week of 6 th to 16 th March, the students were able to start in the sector with training in masonry, tiling and basic modules for introduction to plasterboard, electricity and painting, as well as work orientation sessions. Before the break caused by Covid-19, we spoke to three of Women Can Build students, so that they could tell us their background and their first experiences on the course.

Sandra Ángel, Silvina Arjanda and Raquel Cuenca are very different, like their stories. They are 29, 48 and 42 years old, respectively, and none of them had previously worked in the construction industry, although all three saw the sector as an option for the future. Sandra had witnessed her father working as a woodworker since she was a child, and the trade has always been very familiar to her. After working “at everything”, she has been encouraged to face “a great and creative challenge”.

Silvina was refused permission by her family to work in construction. “How are you going to get into this? It’s going to be very difficult to work with men,” her parents told her. So, this Argentinean began her studies in Business Administration and Management and, now that she is unemployed, she has decided to train in construction. Raquel, for her part, had worked as a trainer and had never considered working in construction, although with this course, she plans to work in different trades of the sector. During the off-months caused by pandemic, Raquel found a job and was unable to complete the Women Can Build course.

“Thanks to this training I felt protected and supported”

None of the three students hesitated to register for this course. “I was encouraged because I think it is a good opportunity to open doors for other women who have never thought about it before,” says Raquel. “That’s the problem, that we didn’t even imagine we could be part of this” she notes. For her part, Silvina tells us that she felt “lucky” to be part of the course: “I thought it was the best way to join the sector. Thanks to this training I felt protected and supported”.

At the time of the interview, they were still in class. These classes helped them to get to know some of the tasks and trades that are part of the sector. “I love it. It’s getting so fast, although I understand that after this course we have to learn more. I didn’t know there was such an academic training in the trades”, says Silvina. For her part, Raquel, thanks to this project, is discovering that “in construction there are many things that can be learned and that it’s not just about carrying sacks, that’s just a small part of what can be done”, she points out.

The type of the course made the students learn about different building trades, every day. However, the three students had ideas for a future in the sector. “I would like to define myself in something that we see in the course and make a Certificate of Professionalism. This is a sector with many opportunities, there is a lot on offer”, says Sandra. For her part, Raquel was interested in the world of “bio-construction”. “This is the first step to reach that goal,” she says.Silvina, on the other hand, is committed to trades “in which I have to be in the act, renovations, rehabilitations, but I still have a lot to learn”.

What was the image that the students had of the construction sector before the course? “I didn’t think it was a male sector, but it was a tough one, where people work long hours every day,” says Sandra. “I never thought that a woman could be here. Not because I can’t, but because I didn’t even think about it,” says Raquel. “However, in a few years we will see that it is normal to talk about a women bricklayer or plumber, and we will not be surprised,” she adds. This opinion is also shared by Silvina, for whom “this type of project”, such as the one launched by Women Can Build, “helps to make this change less difficult for women who are starting in the sector, and faster. The percentage of women in the sector is going to increase in the next few years”.

Why don’t women dare to join the sector? Raquel believes that they do not know if they will be able to, that it is considered “that this is a sector of men and sometimes one even doubts if they will be able to do it”. “I think that, like men, we can do anything, we just have to know that we are able”, she says. Sandra, for her part, believes that “many because they don’t know, others believe that they can’t do it or that it is for men, and others because they don’t decide to be part of the sector in their teenage years”.

What would you say to other women who are thinking of joining the sector? “I would tell them that I encourage them, that this is a job opportunity,” says Sandra. Raquel also encourages the women: “Thanks to the fact that many of us feel empowered, we will be able to change the construction industry. But if we tell ourselves that we are not able to, we are closing doors”, she points out.

Finally, Silvina would say to any woman, and any man, “don’t deny yourself a chance ‘for fear of”. “I think you have to try everything. There is always time to think that you have made a mistake, but you can never go back, to do what you have not done”.

Photo gallery of the students 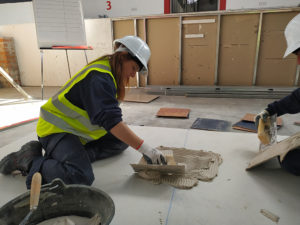 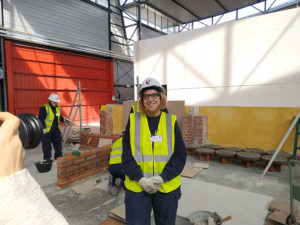 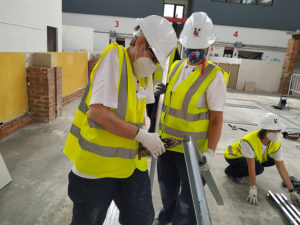 Previous Post
“I still have many insertion difficulties today, as far as it is necessary to be very determined, because there are many prejudices”
Next Post
Women Can Build presents the results of the project to the German public

“What I like about this job is that there are a lot of different things to do and it’s never repetitive. And I also have the feeling that I’m doing something useful”
22 September, 2020
Women Can Build presents the results of the project to the German public
20 September, 2020
“I thought that being a girl I would go wrong, I would not know how to do it, but I am going fine and I am very happy”
12 February, 2020