“What I hear from my bosses is that since I’ve been here, there’s another dynamic in the workshop. Very quickly, they were also surprised by the quality of my work” 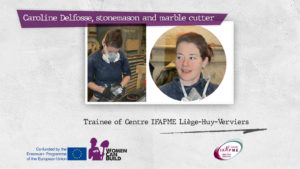 “What I hear from my bosses is that since I’ve been here, there’s another dynamic in the workshop. Very quickly, they were also surprised by the quality of my work”

Question: Why did you choose this job?

Answer: I was unemployed when I received a newsletter from Forem for training in stonemasonry. As I had studied art, I thought I might enjoy it. After my training, I did an internship in the company that hired me in the Plan Formation Insertion and then on a permanent contract as a worker.
I love stone, its smell and all its possibilities! There are so many things you can do with stone. I also like engraving, even if I don’t do much of it in my workplace.

Q: How was the welcome at the company/training centre?

A: When the bosses warned the colleagues that a girl was coming, they were expecting an ice cupboard instead. They were rather surprised!
What I hear from my bosses is that since I’ve been here, there’s another dynamic in the workshop.
The colleagues have taught me a lot during my training courses. This has obviously been beneficial for my integration. But, very quickly, they were also surprised by the quality of my work.

Q: What advice would you give to a girl who wants to do this job?

A: You have to be solid. Both morally and physically! Even if we get along well, there are sometimes reflections. It has to come in through one ear and come out through the other.
We are used to say that girls are “canlettes” but here I notice that men are much more so. When I worked as a cashier, I didn’t know so much gossip!

Q: What has helped you get to where you are today?

A: The Forem training because that’s what gave me access to this profession.
But it’s above all my character. I’m not one to give up.
I was also lucky enough to work with an older person who showed me the ropes of the trade. But after this schooling, I also had to set my limits so that he wouldn’t get too involved in my work. For that, you have to be able to recognize your skills. To know when you’re right or wrong.

Q: What difficulties did you encounter?

A: I have had difficulties in not knowing how to wear, but I always try before giving up. If it’s too hard, you ask for help. But that goes for my male colleagues as well.

Q: Is there a message you can pass on to companies ?

A: Stop believing that women are not capable!
A trial period or an internship is the best way to see if you are suitable.
If it doesn’t work out, at least you’ll have a firm commitment. But if it does work, the company can be pleasantly surprised!

Previous Post
European project “Women can build”, in Piacenza starts the experimental course Ecobricklaying for women
Next Post
Women Can Build. The national dissemination seminar of the European project organized by Formedil was held

Strategic alliance to promote gender equality in the Spanish construction sector
19 November, 2020
“I would tell a girl that if she wants to work in construction, to train and work, to never doubt it just because she is a woman”
20 March, 2020
Women Can Build presents the results of the project to the German public
20 September, 2020