Women Can Build. The national dissemination seminar of the European project organized by Formedil was held 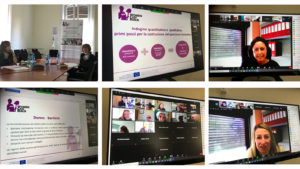 Women Can Build. The national dissemination seminar of the European project organized by Formedil was held

It took place  today 29th October 2020 (9.30 13.00) an online dissemination seminar organized by FORMEDIL on the European project Women Can Build.

The project that involves not only Formedil (Italy), but also Spain, Germany, Portugal, Belgium and Germany, puts in place various actions and tools aimed at intervening on the main actors, on the theme of gender equality, starting from training to the enterprise

The seminar has been a moment of debate and deepening on this issue, putting in place various actions and tools on gender equality starting from training to get to the enterprise, with the aim of enhancing the role of women in the construction sector.

The meeting was attended not only by the directors of the Building Schools / Unified Bodies, but also women workers, trade union representatives and employers’ representatives of the sector who have brought a testimony

Previous Post
“What I hear from my bosses is that since I’ve been here, there’s another dynamic in the workshop. Very quickly, they were also surprised by the quality of my work”
Next Post
Strategic alliance to promote gender equality in the Spanish construction sector

Partners work on gender equality course for trainers at fourth meeting
27 May, 2019
Testimonials from three French women who have chosen to become apprentice team leaders in the Fitting and Finishing area
21 February, 2019
Women Women Can Build closes SomexNet project, for the mobility of European workers and students
4 October, 2019