“Nothing discouraged me to be trained in this sector; moreover, I am not going to stop doing something just because no other woman wants to come with me” 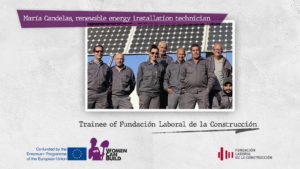 “Nothing discouraged me to be trained in this sector; moreover, I am not going to stop doing something just because no other woman wants to come with me”

Never before Maria Candelas had thought about training in ‘renewable energies’. However, her curiosity and desire to learn made this woman discover a world that was outside her purview and now, she is determined to work in this sector.

At the age of 36, and after being a mother, Maria decided to change her life. After some time out of work, she took a chance in the world of renewable energies through the Certificate of Professionalism in “Basic operations in the assembly and maintenance of renewable energy installations”, which she studied at the training centre of Fundación Laboral in Revilla de Camargo (Cantabria). Being the only girl in a world of mostly men has not influenced this woman to be determined to join the sector. Her desire to learn and improve has encouraged Maria to become acquainted with a new sector and to specialise in it.

QUESTION.- What was your working situation when you enrolled in the course? How did you find out about this course?

ANSWER.- I was unemployed and I didn’t get a job, so I went to look at courses and seize the time. I received letters from the Public Employment Service, offering me different courses. Among all of them, this was the one I was most interested in.

Q.- Why did you choose this particular course?

A.- Mainly out of curiosity. I didn’t know anything about the course and I saw that it was a way out for my future. It also caught my attention because this course had nothing to do with my previous work. I had been as a field guard and on an assembly line in laboratories. I’m like that, a bit of chaos and passion.

Q.- How was your first day in the course?

Q.- How many students were in the course? Were you the only girl?

A.- We started with fifteen students and finished with eleven. And yes, I was the only woman. I have no idea why others were not encourage to take part in this training. I don’t know if it’s because there were other courses, or if this simply didn’t interest other women. Maybe it was the fact of attending a course where there were no other women. Although that’s a vicious circle: you don’t sign up for a course because there aren’t going to be any more girls, you think you’re going to feel excluded…

Q.- Did you have any problems because you were the only woman in the course?

A.- No, the truth is that the course took place as if all the rest were women. But I also have to say that it was a bit different. There were fifteen boys and I was the only girl, and in the end there was a bit of “men against women and women against men” competition, but I worked well with them. I also have to say that I had some problems with some, because some misunderstand, they think that if you talk to them or you are nice… But during the course I gradually gained my place, and they saw that I am capable of doing the same work. Maybe there are others who can’t do it, but that’s like everything else.

Q.- To you, being the only woman in the course didn’t throw you back…

A.- What’s more, it made me grow up and say: now I’m going to finish it and I’m going to be able to do it. We have to keep fighting. Nothing intimidated me, and I’m not going to stop doing one thing because no one else wants to accompany me. It was what I wanted to do at that moment. In general, my colleagues respected me as a person, they didn’t look at gender, so there was no problem.

Q.- What did you find more interesting than what you saw in the course?

A.- Of course, what I had never seen before, such as solar panels, both ACS and thermal. It was what I wanted to see, what really interested me: how they are installed, the calculations needed, and the different types of installations…

A.- What I disliked the most was the subject of mechanics, seeing myself working in a workshop, since I had never seen myself in one. Of course I knew what a wrench was, a hammer… But from there to driving and learning to file or weld, there’s a distance, because I had no idea. Of course now I would be able to do all this if asked. It’s like everything else: if you haven’t concerned about learning something, everything frightens you because you don’t know anything. But if you feel like it and start, of course you learn. I’m capable of doing it now, of course.

Q.- What has been your general impression of the course now that you have finished it?

A.– It has been good. I have acquired knowledge that will help me to find a job and to do things at home. Look, for example, the other day our sink got stuck and I was able to dismantle and assemble it. Before the course, I didn’t even want to do these things. It may be silly, but now I do, and I’m excited, because you see that what you’ve studied you can put into practice.

Q.- Did you do an internship in a company? How was the experience?

A.- I did about 150 hours of internship in a plumbing company. I can help, but not everything I would like, because I do not have the knowledge and there was no project aimed specifically at the installation of solar panels. But we did other tasks that could help me find work: we did gas installations, we installed decalcifiers, maintenance work… We played different sticks, and although we moved in groups of three or four people, there was no woman in sight.

Q.- A problem that affects the construction sector is the lack of young work force, what was your impression during the course? Why didn’t you encourage yourself to do this course before?

A.- Only three or four of the eleven who finished the course were young. The rest were people between 50 and 60 years old. And, of course, once you start working on this, I think it’s going to take a little while. In my case, I have encouraged myself to do this course after being a mother, trying to have another way out, because I see that it is increasingly difficult to find work. I didn’t consider doing this type of course before, I was doing well in other sectors.

Q.- Are you looking for a job in the sector?

A.- I’ve sent CVs of everything I’ve worked on, including the world of renewables. I have working contacts from the course done and some job offers where they are looking for people with knowledge and willing to further training with them, at the company directly. I see myself capable of installing solar panels, and that is what companies are looking for now. The problem is that now I don’t have mobility because of my little children. If I had, right now I would find work, because job offers are coming out in Aragon, in the south…

Q.- Do you think you may have problems when it comes to combining your work in the sector with family life?

A.- That’s the problem, family conciliation. There you have to work a lot, but also for men. If you are looking for a company that has a continuous schedule, with which you can do things, everything is fine. But of course, there are companies that have it and others that don’t. Where I did my internship, I would leave at 7 in the morning and not return home until 7 in the afternoon. It is not impossible to reconcile both lives, of course you can do it, but it is true that you are giving up one part. Before I had children I worked as hard as I could, but when you have a family it is more difficult. But well, I hope everything can be done. I want to do both. There are still many doors to open.

Q.- What would you say to a girl who is considering entering the construction sector?

A.- I would say that in life you must have personality. I have it. Being the only woman with fifteen men, you don’t have to take everything literally, but you have to know how to fight. If you want to and that’s what you want, you should pull forward, fight for it. That it’s not a problem, you can never give up. I would encourage her to do it, and break down barriers. In the future there will be more women in the sector.

Previous Post
“I think the prejudice of men on the construction site whistling after girls is still prevalent in people’s minds”
Next Post
Women Can Build, an example of equality in the Second Conference on Innovation in Training in the Construction Industry

“The first step to improve your job search is to know yourself”
20 November, 2019
Online course available for trainers on gender equality
1 October, 2019
Women Can Build. The national dissemination seminar of the European project organized by Formedil was held
1 November, 2020