Women Can Build partnership takes over training for women in construction, via videoconference 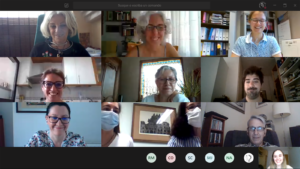 Women Can Build partnership takes over training for women in construction, via videoconference

The partners from Spain, France, Italy, Portugal, Belgium and Germany have held the sixth meeting of the European initiative online, due to the restrictions of the Covid-19.

Women Can Build met for the sixth time on July 1st to take up the introductory courses on the construction sector, which are designed to help women find their professional vocation within the industry. The meeting, scheduled for the end of June in Italy, had to be adjusted to the safety criteria established by the European Commission and the national governments of the countries, because of the Covid-19.

The flu pandemic interrupted the development of the training course ‘We build too’, launched by Fundación Laboral de la Construcción and the Employment Agency of the Madrid City Council in Spain, in addition to the one planned in Italy, Portugal and Belgium. On the other hand, BZB and BTP CFA could carry out in a satisfactory and complete way the training of Women Can Build in their respective training centres in Germany and France. As a consequence of this situation, the deadlines foreseen at the beginning of the initiative have been affected, which is why the Erasmus+ programme of the European Commission has granted an extension of the project, until the end of October 2020.

Taking up the training of the sector

One of the points to be discussed by the partnership has been the launch of the course ‘We build too’ of Spain, which will be resumed on July 22nd, at the facilities of the Fundación Laboral de Madrid at Vicálvaro. In this way, Women Can Build will once again open its doors to the ten students who began their introduction to the sector last March.

Along with the Spanish version of the Women Can Build training, the institutions in charge of providing it in Italy, Portugal and Belgium are considering the possibility of carrying it out in accordance with the security measures and government recommendations against Covid-19.

During the meeting, we also addressed the implementation of dissemination events in the countries of the partnership to raise awareness and promote the need to build an open sector with possibilities for women in order to find their vocation and develop in the professional field.

Previous Post
Three women participate in the pilot experiment “Women can build” at the Ifapme Centre in Belgium
Next Post
The introductory course to the sector for unemployed women, ‘We build too’, is back

“To the women who want to be part of the construction, I would say to them to have courage, that this is a job opportunity”
17 Sep 2020
Online course available for trainers on gender equality
1 Oct 2019
“I still have many insertion difficulties today, as far as it is necessary to be very determined, because there are many prejudices”
7 Aug 2020