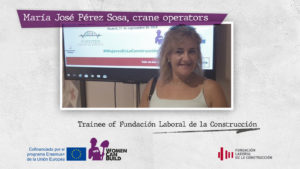 María José Pérez Sosa, with more than 20 years of experience behind her, is one of the first women crane operators in Spain. Her perseverance and professionalism have encouraged her not to give up and continue working

María José Pérez Sosa is one of the first women crane operators in our country, trained as a tower crane operator at the Fundación Laboral de la Construcción, in Las Palmas. More than 20 years ago, this canarian woman looked for a better future in the construction sector, for which she has felt passion since she was a child. Since then, it has been a pioneer in an environment that is still mostly male. Although her beginnings in construction were not easy, her effort and love for her work have made this woman a leader in the sector in the Canary Islands.

QUESTION.- How did you first become interested in the construction sector?

ANSWER.- Before I started building, I worked in a banana packaging company. At a certain moment, the company was preparing a staff downsizing plan, and I thought about getting some professional training, because I was about to be fired. I saw that the Fundación Laboral was offering a Tower Crane Operator course and I requested more information. I knew I was going to be the only woman, but I signed up for the course.

Q.- What was the reaction of your colleagues when they saw that there was a woman in the course?

A.- Everyone was amazed by my presence: I was the only girl and they were staring at me. However, in the course, I used as much time as I could because I wanted to be a crane operator. For example, during the training classes I worked very hard. If one of my classmates was missing, I would take his turn, and when the others left, I would continue with the crane. In the end, I passed all the exams the first time and became a crane operator.

Q.- Why did you jump into this sector?

A.- I liked machines since I was a little girl. I saw the cranes and I thought it was impossible to drive those big machines. Since I was a child, I have felt the cranes inside of me.

Q.- After you took the Tower Crane Operator course, how did you find your first job in the sector?

A.- One day, at the end of the course with the Fundación Laboral, I was called to do a test in a company. They called me when there was no one at the site, I passed the test and started working in the company. Sometime later, when I was already part of the staff, the manager told me that I had been called because when he heard my name he thought it was a joke that there was a woman with a crane.

Q.- And what did you feel on your first day of work in construction?

A.- The first day I wanted to leave. There were only men and everybody was looking at me, but I said to myself: ‘Why did you become a crane operator? It’s now or never. And I stayed. At first people were astonished to see me, but later they saw that I was working well.

Q.- What do you like most about your work?

A.- I like everything. However, if I had to choose, the formwork is what I like the most: lifting the structure from zero, concreting, and working with iron… I have a passion for cranes and for my work. I enjoy working. Even if I don’t see the crane, just by hearing the motors I would know what movements it is making.

Q.- Did you ever think about giving up?

A.- At first it costs a little, because you have to adapt to people. Ever since I started working on this, I was clear that I was a crane operator, a professional even if I didn’t have much experience, because you acquire experience through work. I stayed and continue until now, and I have never had any problems. My colleagues have always behaved with respect. They don’t treat me badly; I can’t complain.

Q.- In these 20 years, has the way in which you relate to your classmates changed?

A.- The treatment has always been good, and better and better. I feel like a good professional: I know what I have in my hands and what I do. That’s why I’m not afraid of any man, I adapt to any situation. I know that I am the crane operator of a work. You don’t have to look at me as a woman or a man, but respect my work.

Q.- How many women have you met in the sector?

A.- Very few. I have passed through three companies in the sector and most of the women I have found work in the office. Once I met a woman who was an electrician, but when the crisis came she had to leave the sector.

Q.- Why do you think women don’t encourage themselves to work in construction?

A.- I think that women my age don’t decide because they think they won’t find a job. They are afraid that companies won’t hire them. They also think they’re going to end up in a man’s world. In my case, society is still surprised to see a woman with a crane. But I would like to get to a work and find a group of contractors or painters. I would like them to decide, not to be afraid. I encourage women, if they are determined, to start working in the construction sector. They are going to do what they want, their work. I am one woman out of 400 men, and at the construction site I am one more. In addition, I believe that, in some cases, it is also true that we work better than the men, we care more about the details. We have a sixth sense in this respect.

Q.- What would you say to a girl who is considering joining the construction sector?

A.- I would tell her not to be afraid. I’ve been in the sector for 21 years because that’s what I wanted. You don’t have to think about anything or anyone, but about doing what you like, your work, without thinking about what they will say. I think that everyone has to be sure of what they want. Maybe later, when you work in construction, you see that the sector was not as you thought. For example, my colleagues have respect for me. Men don’t eat anyone.

“Why can’t I give myself the opportunity to be trained in what I want, that opportunity that I didn’t even have in another moment of my life?”
4 Sep 2019
Women Can Build. The national dissemination seminar of the European project organized by Formedil was held
1 Nov 2020
“I couldn’t guess where my path would lead me, but I wanted to take a direction that wasn’t so typical for a woman”
22 Aug 2019