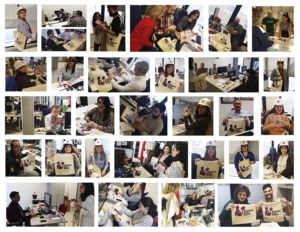 Fundación Laboral de la Construcción and the Women Can Build project joined forces this year to extend International Women’s Day to Equality Week, in order to remember the need to raise awareness and promote the role of women both in construction and in the rest of society. “Gender equality is not only a fundamental human right, but also the necessary basis for achieving a peaceful, prosperous and sustainable world”, as established by the United Nations (UN) in the Goal 5 of Sustainable Development.

The European initiative wanted to add its peer message to the communication campaign #yotambienconstruyo promoted by Fundación Laboral de la Construcción, during the week of March 4th to 10th, with the aim of making visible and pay tribute to all women who work or want to be part of the sector.

Among the actions implemented by the joint entity, 200 work helmets were designed with the brand image of the Women Can Build project and the slogan #yoambienconstruyo, which were sent to women representatives of the construction industry, to senior officials of business associations and trade unions and to journalists, to give visibility to the collective through their support. The campaign exceeded expectations, achieving a wide impact on social networks. More than 1,500 women showed their commitment to reach an equal sector by publishing their image with the helmet, mainly on Twitter and Facebook.

To complete the campaign, Fundación Laboral launched a video to reflect the 9% female presence that makes up the construction sector, in which students and workers participated, among which Beatriz Oliete, responsible for the Women Can Build project, wanted to do her bit by adding to this piece that reached 42,000 reproductions on YouTube.

To mark the end of Equality Week, Women Can Build distributed promotional bags and leaflets with information on the European initiative among the Foundation’s workers, who did not hesitate to join in with photographs and shouting in unison: “We build too”.

Visit the photogallery of the workers of the Foundation.

The year 2018 closed with 115,600 women working in the construction industry, compared to 1,164,300 men, according to the Economically Active Population Survey (EPA). These data place the sector among those with the least female presence, along with mining. For this reason, the Foundation promotes specific actions and initiatives aimed at ending prejudices and social barriers that reduce women’s possibilities to work in construction, empowering them and helping to raise awareness. Likewise, another essential line addressed by the peer entity is the development of training and support capacities for the promotion of professional careers within the sector, reaching, during 2018, more than 5,500 women, 20% more than the previous year.

Previous Post
“When I work I’m ‘the crane operator’. They don’t have to see me as a woman or a man, they just have to respect me”
Next Post
“I hope there will be more women in the construction sector in the future, to make a stand and prove that we are here and we’re worth it”

The delegate for Economy, Innovation and Employment of the Madrid City Council hands out diplomas to Women Can Build students
10 December, 2020
Women Women Can Build closes SomexNet project, for the mobility of European workers and students
4 October, 2019
Women can Build consortium advances work at its third meeting in Düsseldorf
21 December, 2018