“What I like about this job is that there are a lot of different things to do and it’s never repetitive. And I also have the feeling that I’m doing something useful” 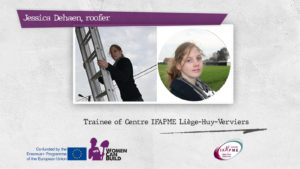 “What I like about this job is that there are a lot of different things to do and it’s never repetitive. And I also have the feeling that I’m doing something useful”

Question: Why this job?

What I like about this trade is that there are a lot of different things to do and it’s never repetitive. We’ll never have two roofs the same! Also, I often get along better with the boys. And I also feel like I’m doing something useful.

Q: How was the welcome at the company?

Foreman: I was a bit scared at first, it’s true. But after all, we see more and more girls on our sites and in other sectors such as buses or the police. I had already worked with a woman before so I was less apprehensive.

J: I was very well received. They let me work on everything, I handle all the tools. The colleagues don’t let me do the ungrateful tasks. After a fortnight in the company, I’m already suddenly on my own.

Q: What advice would you give to another girl who wants to do this job?

J: It takes courage, above all! Getting on well with the boys and enjoying the frank atmosphere. Show that you know how to laugh. That it’s not because you’re a girl that you’re capricious. To show them that it doesn’t change anything that there is a girl in the team.

Q: What helped you to be there today?

J: First of all, the orientation training I took opened my eyes. Secondly, my cover trainer was always there to tell me what was going well and what was not. He was also the one who helped me find my internship. He is always there to help those who want it!

Q: What were the difficulties you encountered?

J: Strength! I’m not yet as strong as my colleagues, but I still carry it. In a company, you have to carry much more than in training and above all you have to have the technique to carry without hurting yourself. In training, we didn’t learn how to carry or throw tiles. I kind of missed that.

Q: Is there a message to be passed on to companies ?

J: Huh, not especially since I’ve already found mine (laughs)! More seriously, I advise them not to be closed. For girls, as for boys, there are volunteers and others who are not. Surely there are girls in our trades who don’t want to do anything, but I think it’s rarer… Because if they work in construction it’s because they really want to!

Previous Post
Women Can Build presents the results of the project to the German public
Next Post
13 students males between 15 and 20 years old, discuss about the Potential prejudices about gender work in the construction sector

“They tell you that women come to the sector to steal work from men, and that’s not true. There’s work for everyone”
5 June, 2019
These women who choose the construction industry and public work trades
28 March, 2019
The Agencia para el Empleo de Madrid, at M21 Radio
30 November, 2018