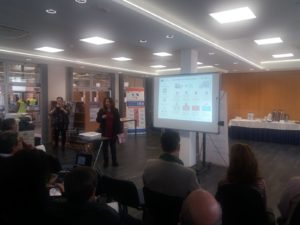 Cenfic invites Women Can Build to talk about gender equality in the construction sector.

On February 8th the sixth Bus.Trainers meeting was held with the presence of delegates from Malta, Spain, Italy, Greece and Portugal, in Lisbon, at Cenfic’s headquarters, which in addition to hosting the meeting also held a dissemination event, in collaboration with the Construction Labour Foundation, leader of the project.

The meeting was mainly dedicated to the discussion and definition of some conclusions about the development of the training resources for trainers, highlighting the development of an e-learning platform and the evaluation system. In addition, the main organisational aspects of the national seminars to be held in the different countries of the consortium were discussed.

As part of the event on “Innovative Projects for the activity of trainers”, Cenfic invited the head of the Women Can Build project of the Construction Labour Foundation, Beatriz Oliete, to talk about gender equality in the construction sector, introducing all those present to the Women Can Build project, which aims to break down stereotypes and promote the labour insertion of women.

The dissemination event was attended by several professionals from Portuguese construction training institutions and representatives from Malta, Spain, Italy, Greece and Portugal.

Previous Post
“I think that many young women don’t think of doing a traineeship in the construction industry. I probably wouldn’t have thought of it either if I hadn’t seen the opportunity in the family business”
Next Post
“Come woman, courage! If you keep thinking that these are men’s jobs, there will never be a sector with women“

“I hope to find work in construction because I like it very much”
4 December, 2019
European project “Women can build”, in Piacenza starts the experimental course Ecobricklaying for women
21 October, 2020
The Chilean Chamber of Construction is interested in the projects of Fundación Laboral de la Construcción
2 September, 2019