Women Can Build: An initiative to foster gender equality in the construction sector 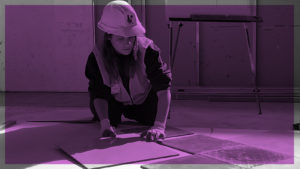 Women Can Build: An initiative to foster gender equality in the construction sector

The Erasmus+ project that shows women in construction ends as an example of good practice in equal opportunities for industry.

After 38 months of partnership, Women Can Build finishes with more than 100 testimonies collected, 500 teachers surveyed, 63 stakeholders consulted, 50 women trained, more than 150 media impacts and more than 30 participations in events. These figures show the relevance of the project both at a national level -in Spain- and in the world; because Women Can Build has exceeded the expectations of the European consortium, managing to have an echo at an international level.

This European partnership formed by seven organisations from Spain, France, Belgium, Germany, Italy and Portugal, and led by Fundación Laboral de la Construcción, was born in September 2017, with the aim of redefining Vocational Training and orienting it towards a construction industry on an equal footing.

To this end, the project set out three areas of action: sectoral trainers, as they are a ‘gateway’ to the sector; companies, because they are a key element in the implementation of gender equality; and finally, women. This last pillar has been the main focus of attention. The consortium has tried to show construction as one labour market option, and to break down the barriers and prejudices which mean that only 9% of the professionals in the Spanish sector are women, according to the data collected by the Industrial Construction Observatory of Fundación Laboral.

These figures of the sector, promote the need to boost equality projects that help to improve the diversity of professionals in the works, such as Women Can Build, which in addition to the technical work has developed an important work in terms of awareness and dissemination for the visibility of women.

For more than two years, many campaigns have been launched on behalf of Women Can Build. One of the most noteworthy is the campaign launched in March 2019 by Fundación Laboral de la Construcción, which obtained 42,000 views on YouTube and the support of more than 1,500 women, who published their image with the Women Can Build helmet on social networks.

Since then, the initiative has used International Women’s Day to promote awareness actions that have been very well received by public and media.

The echo of Women Can Build

Women Can Build has positioned itself as an innovative and transgressive project in the field of gender equality. Thus, it has had more than 150 impacts on the media, including: the program ‘Madrid Trabaja’ on the regional channel TeleMadrid, ‘Ellas Pueden’ on Radio Nacional de España, ‘Aquí hay trabajo’ on Radio Televisión Española RTVE, ‘Objetivo Empleo’ on M21 Radio or the program ‘La Mirada’ on Canal Sur Radio, among other media of great repercussion at a national level.

In addition, it is worth noting the participation and presentation of the project in more than 30 national and international events, such as the organisation of the round table ‘Women Can Build’ at Construmat 2019 International Fair in Barcelona; the presentation at the Conference for Women’s Empowerment and Gender Equality, organized by the University of Applied Labour Studies, part of the Federal Employment Agency (HdBA), in April 2019; Participation in the Women and Architecture conferences, organised by the Malaga City Council and the College of Architects, in February of the same year; or the dissemination of the joint conference of Fundación Laboral and the Red Cross, ‘Promoting the incorporation of women in construction’ in September 2018; among other events, workshops or conferences.

In addition to highlighting the prize for social commitment in the task of disseminating, promoting and fostering the value of women in the sector awarded by the Spanish Association of Women Entrepreneurs in Madrid (Aseme, for its initials in Spanish) to Fundación Laboral de la Construcción, in 2019.

As part of the impact, we must highlight more than 14,600 website visits and 732 followers reached in social networks, which have constituted the digital community of #WomenCanBuild.

Improving the assertive skills of sectoral trainers has been one of the objectives proposed and achieved by partnership. Through the launch of the online course for the development of gender equality competence for teachers and the publication of the report ‘Equality in teaching practice’, which collects the experiences of 500 training professionals, it has been possible to make a diagnosis of the teaching approaches used to identify gender prejudices and stereotypes inside and outside classroom, and to propose measures or tools for action in this area.

The course is an interactive training, which promotes learning through educational videos, which exemplify the inclusive measures and techniques to be implemented during theapprentices training in the construction sector.

Over the years of the project, the eight Women Can Build organisations have been collecting the “first-hand” experiences of women in the sector from all six European countries. In short, they have managed to collect over a hundred testimonies on what it is like to work in construction; in addition to these interviews, two video testimonies were published by students and teachers from Fundación Laboral de los Consejos Territoriales de Madrid and Las Palmas:

Along with this action, the consortium has launched pilot experiences in their respective countries to try to increase women’s interest in the sector. The Spanish experience has been noteworthy, not only for the interest it has aroused, but also for the good reception it has received from the public, as more than 65 women registered for the course “We build too. Practical initiation to construction”, organised jointly by Fundación Laboral de la Construcción and the Madrid City Council’s Employment Agency. 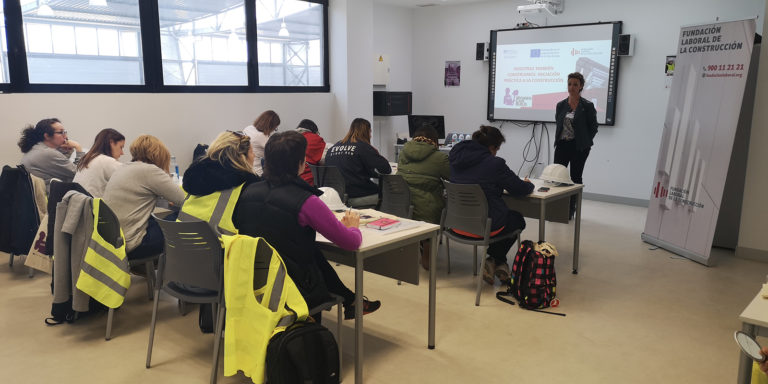 The objective of obtaining a business impact was based on the need to encourage the building of gender competences in industry and to encourage companies to obtain free guidance for the promotion of gender balance in their organisations. To this end, an Action Plan has been drawn up to tackle horizontal and vertical gender segregation in the construction industry, triggering gender balance by raising awareness and providing guidance to economic and social agents in the sector.

Previous Post
13 students males between 15 and 20 years old, discuss about the Potential prejudices about gender work in the construction sector
Next Post
European project “Women can build”, in Piacenza starts the experimental course Ecobricklaying for women

The introductory course to the sector for unemployed women, ‘We build too’, is back
16 Jul 2020
“If we keep thinking these are men’s jobs, there’s never going to be a sector with women”
3 Sep 2019
“I think that many young women don’t think of doing a traineeship in the construction industry. I probably wouldn’t have thought of it either if I hadn’t seen the opportunity in the family business”
4 Feb 2020